skip to main | skip to sidebar

My poems 'A Vision of the Future' and 'Grassgreen' are included in the new issue of Polar Starlight, a spinoff of Polar Borealis focusing just on poetry.  The issue can be downloaded for free here POLAR-STARLIGHT-5-March-2022.pdf , and more information about both magazines is available at polarborealis.ca

Home for the Howlidays

The Home for the Howlidays anthology from Tyche books has been released, which includes my story "Apple Night." The links to order print or ebooks can be found here: https://tychebooks.com/howlidays . The theme is a combination of winter holidays and canines, perfect for reading on a long winter's night. I don't have my copy yet but I am looking forward to reading the other stories, especially the one by local author E.C. Bell, who gave some hints about the story at her booklaunch for the latest in her Marie Jenner paranormal mystery series.

The Day Auntie Boiled Over

The day Auntie boiled over, there was a wind blowing.

The sky was smoky and the sun was orange,

Sardonic and terrible, and it looked about itself

And then breathed out all her frustration and sorrow

And the wind carried it all the way to the palace

And the laughter of the cruel ones died on their lips

And the cups fell from their hands

And the silence that followed was like the ebb of a tsunami.

It was like the moment of waking from a nightmare. I have been told that in some northern Indigenous traditions, the aurora is described as the hair of departed ancestors. The sky last night was a beautiful illustration. My son tells me he has seen auroras for several nights, including fiery red ones.
Posted by JYTK at 6:12 AM No comments:

We Must Write Poems About Trees 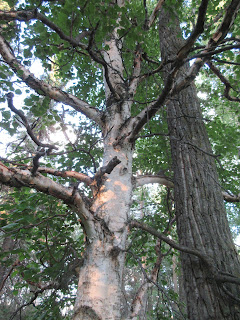 We must write poems about trees, not just take pictures,

because a picture is always too far, too near, too simple.

If it shows the sweep of branches it misses the texture of bark and leaf.

A tree will not confine itself to one perspective. It is like history

or dreams, or anything we try to grasp like the blind ones

with the elephant: anything too big and too intricate and too sacred. 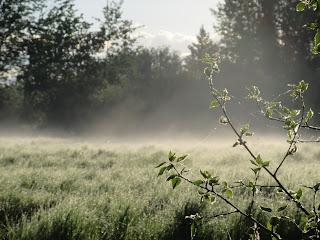 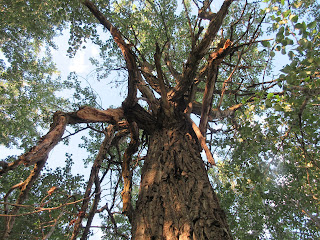 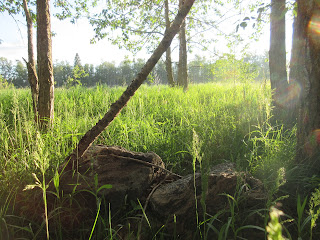 Perhaps inspired by reviewing Ancient Greek lately, I have been mulling over the question of whether certain colloquial usages of the word 'like' could be interpreted as mood indicators. I feel that, though these usages fall outside standard formal grammar, they have a grammar of their own that is interesting and expressive. Please note that I have only briefly researched similar moods in other languages, and my mention of them below is not based on detailed knowledge of them. I simply wish to show that grammatical mood can be used to express similar things to what I am describing.

Grammatical moods colour our statements, indicating whether what we are saying is a statement of fact, an opinion, a hope, a possibility, and so forth. The most official types of mood are indicated by a change in the form of the verb. There is not a lot of this in English, where almost all verbs are in the indicative, or factual form, but we have a few subjunctive forms, such as the 'were' in 'If I were a rich man.' We produce the imperative mood by omitting the pronoun in sentences such as 'Go to bed already!' We also produce a lot of shades of mood through other sorts of indicators, such as constructions with auxiliaries such as 'would' or 'may' and adverbs such as 'perhaps' or 'maybe.'

Consider the following sentences: 'He was six feet tall.' 'Maybe he was six feet tall.' 'He was, maybe, six feet tall.' The first is a plain indicative statement: the speaker knows how tall the person being described was. In the other two, the word 'maybe' functions as a sort of mood indicator, making it clear that we are actually not certain how tall he was. There is a difference depending on the placement in the sentence. The second sentence suggests that the speaker has not actually seen the person described, but is stating the possibility that he might be that height. The third sentence suggests that the speaker has seen the person, but it giving an approximate guess at his height.

In colloquial English, the word 'like' is often used in a similar way to 'maybe' in the third sentence. 'He was, like, six feet tall' can have an almost identical meaning to that sentence. It may also indicate dramatic exaggeration. The speaker might be talking about a child who was unusually tall for his age, but really considerably less than six feet. Often there is a sense of improbability or amazement implied as well as uncertainty or exaggeration. In this there may be a resemblance to the admirative mood which is found in some languages, and which shows the speaker's surprise at what they are reporting.

There is a difference between this sort of usage of 'like' and the more standard 'like' as can be seen by comparing the following: 'She was like a mermaid.' 'She was a mermaid.' 'She was, like, a mermaid.' The first sentence states, indicatively, that the person resembles a mermaid. It is a simile. The second sentence is also indicative, but might be literally or metaphorically true, the latter being not indicated grammatically in English, but only by context. The third sentence is a modification of the second. Where the original sentence is literal, the added 'like' indicates an uncertain or admirative quality. Where it is metaphorical, the 'like' becomes a sort of tag to show that the speaker is not stating the literal truth, but dramatically exaggerating. It does not do this in the same way as in the simile: there is a sense of juxtaposition between the subject and the image to which she is being compared that highlights the idea of this image being a conscious dramatic exaggeration. I would call it more a metaphor than a simile in the way the subject and image are compared, though perhaps truly it is neither, but a third or intermediate type of comparison.

These qualities of uncertainty and recreation may be akin to the renarrative mood which is found in some languages. The renarrative indicates that the speaker is repeating something that they have heard, as it was told to them, rather than as it happened. It can be related to the admirative mood mentioned above.

It is possible that the speech contruction with 'like' evolved from phrases such as 'he was saying something like,' or 'I was thinking something like,' shortened in casual speech. This does provide a fairly equivalent, though clunky, formal English paraphrase of 'I was like,' in many cases. I am more inclined to think that the use of 'like' inserted as a mood indicator as in the mermaid example came first, so that 'I was thinking,' became 'I was thinking, like,' when the speaker wished to indicate that they were approximating and dramatically exaggerating what followed. The loss of the specific verb 'saying' or 'thinking' does not just simplify, but often indicates uncertainty as to whether the words reported were actually said or just thought, or whether they merely express an attitude as viewed in hindsight.

What is most important to notice is that the use of the word 'like' affects the way we view the information that comes after it. I think the idea of a mood is useful in defining the way in which it does this. The use of 'like' creates a special sort of space in which we can present information in a dramatic, highly coloured way. It has advantages over other ways of creating a similar sort of space: context and tone of voice do not always suffice to avoid misunderstanding. There is a definite playfulness to this space, and it is often used to create humorous effects. Sometimes a 'like' is thrown in almost without any meaning except a sort of invitation to engage in this sort of discourse: to place the conversation in a space where the participants can feel free to hold up a sort of funhouse mirror to the literal, indicative world.

My poem 'Devoured' and story 'Till all the Seas Go Dry' have been included in the Stellar Evolutions anthology of selected pieces from the first 15 issues of Polar Borealis magazine. Here is an announcement on the SF Canada website, which includes links for more information and to order via Amazon:  https://www.sfcanada.org/stellar-evolutions-edited-by-rhea-rose/

JYTK
Ardrossan, AB, Canada
Welcome to my blog! My name is Jennifer Kennedy, and I write under the byline J.Y.T. Kennedy. I have a website with information about my published work, and other odds and ends, at https://sites.google.com/site/jytkennedy/home